Vote for your Regional Woman of the Year 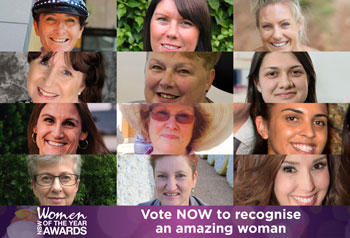 Earlier this month Minister for Women Pru Goward announced the finalists for the 2015 NSW Women of the Year Awards, encouraging people to head online to vote.

Twelve finalists from more than 200 nominations are open for public voting in three categories including:

The stories behind each and every nominee are inspiring and define them as role models to others. It is now up to you to choose the winners in each category. Visit Women NSW to cast your vote! Voting ends Friday 20 February 2015. The winners will be announced at a reception in NSW Parliament House on 4 March.

Here’s a snapshot at our REX Airlines Regional Woman of the Year Award finalists. For their full stories and other category finalists visit the Women NSW website).

Barbara Cowley, Hunter Valley: Barbara Cowley helps young women in the Hunter Valley develop their own personal worth, strength and purpose through a group mentoring and personal development program called SHINE. SHINE aims to help young women realise their potential and prevent problems such as drug and alcohol abuse. Barbara became a volunteer with the program in 2013 and, realising its far reaching potential, a dedicated fundraiser shortly after. In 2014, in lieu of regular birthday celebrations, Barbara created a new fundraising event called ShineWALK180.

Catherine Daley: CEO Catherine Daley makes a difference to rural Australians by her leadership of integratedliving, an organisation that helps older Australians and people with disability live independently in their own homes. Integratedliving provides services including physiotherapy, speech pathology, cleaning, meal preparation, counselling, home modification, transport, social activities, respite and telehealth services. Her leadership of the not for profit enterprise has seen a small regional organisation grow into a multi state business expected to turn over $50 million this financial year. Since becoming CEO four years ago the business has grown 200 per cent, winning significant government contracts that will see health dollars flow to rural Australians. Catherine employs more than 780 staff and 315 volunteers.

Kate O’Callaghan, Riverina:  Riverina-based business leader Kate O’Callaghan has played a leading role in the development of the cotton industry in the Murrumbidgee Irrigation Area, by building the capacity of local growers through collaboration, education and innovation. An agronomist by profession, Kate is well-respected in the traditionally male-dominated agricultural sector. The combination of Kate’s commercial expertise and relatable approach has been credited for supporting the potential for cotton production in the region.

Christine O’Mahony, Central West: Christine is well known in her local communities of Wallerawang, Portland and Lithgow for her efforts to help the most vulnerable and disadvantaged. Christine has been extensively involved in the St Vincent De Paul Society for over 31 years and was recently appointed President of her local region. In addition to providing food, clothing and crisis accommodation, Christine also provides much needed emotional support. She believes empowering people, not blaming them, is the answer to combating poverty.

Best of luck to all the finalists and a big congratulations on your nomination!

Vote now for Rex Regional Woman of the Year